The Chicago Architecture Center and the Chicago Architectural Club announced the three winning designs for the 2021 Chicago Prize Competition, which called for innovative adaptive reuse proposals that would breathe new life into the iconic Illinois Thompson Center. The winning proposals designed by Perkins & Will, Eastman Lee Architects and Solomon Cordwell Buenz represent alternate visions for the future of the postmodernist monument. 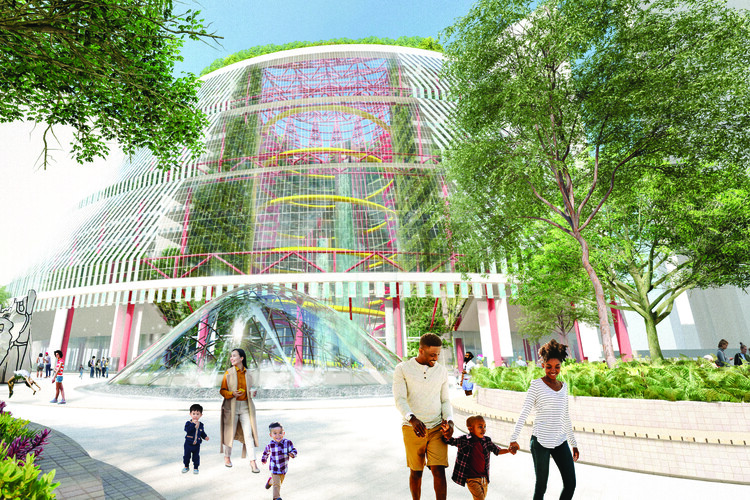 Designed by Helmut Jahn in 1984, the Thompson Center went on sale in May 2021 and is currently under threat of demolition. The competition aimed to showcase the preservation opportunities and the potential for adaptive reuse of the fascinating postmodernist building. The winning projects were chosen from 59 proposals designed by established companies, young architects and students.

“Offset: The Vertical Loop”, designed by Christopher Eastman and Tom Lee of Eastman Lee Architects, offers a new thermal envelope behind the existing curtain wall, enclosing a public park at ground level. The mixed-use scenario envisions public and commercial activities for the lower levels and private residences on the upper floors, topped with vegetable gardens on the roof. Architects describe their goal as “to shed light on how to approach the preservation of the building in a way that could reduce the cost of repairing the building, and to help support the chorus of efforts to preserve the Thompson Center for future generations.”

“In the context of global climate change, we as designers should seek all opportunities to reuse and reuse existing structures instead of tearing them down”, explains David Rader, designer at Perkins & Will. The “Public Pool” proposal submitted by David Rader, Jerry Johnson, Ryan Monteleagre and Matt Zelensek of Perkins & Will transforms the atrium of the building into a public water park, accompanied by public facilities on the ground floor while the upper levels would house hotel. The design echoes the playful attitude that carries over to Helmut Jahn’s design and plans to create a new local destination.

“One Chicago School” reinvents the monument as “an urban center of public education” and envisions the transformation of the Thompson Center into a prototype public school with an emphasis on public policy and civic engagement. The design response “Is motivated by notions of preserving buildings, rethinking the role of large mixed-use buildings and maintaining an inclusive public space for all of Chicago”, says Kaitlin Frankforter. The proposal was designed by Jay Longo, James Michaels, Kaitlin Frankforter, Michael Quach, Abaan Zia, Mackenzie Anderson, Nicolas Waidele, Roberta Brucato, Zachary Michaliska of Solomon Cordwell Buenz.

The competition jury included experts in civic spaces, museum design, restoration architecture and historic preservation, including Thomas Heatherwick, Carol Ross Barney, Peter D. Cook or Mikyoung Kim. The winning designs and the four other honorable mentions finalists are currently on display in a pop-up exhibit in the East Wacker Drive Galleries at the Chicago Architecture Center.

These three design proposals represent distinct and exciting alternative futures for Helmut Jahn’s iconic and postmodern masterpiece. The Chicago Prize competition proves how creatively the Thompson Center has enduring value, whether through a mixed-use, civic and / or recreational destination as the winning designs envision. Failure to protect and adapt this one-of-a-kind space would be shortsighted and rob Chicago of one of its greatest architectural achievements. – Juror Bonnie McDonald, President and CEO of Landmarks Illinois

A public forum on the future of building organized by the CAC will take place in November and will bring together the architects of the three winning proposals, a representative of the jury, as well as civic officials. Chicago Architectural Club Co-Chair Elva Rubio says event “will be a rare opportunity for the public to participate in a debate on the future of the Thompson Center as the State of Illinois considers purchase proposals and possible demolition of the unprotected building. “