A great artist always criticizes his successors. This is why Marcello Gandini did not hesitate to express his dissatisfaction with the 2nd generation Lamborghini Countach. San’Agata’s latest press release touts the history of the Raging Bull, leaving its greatest creator visibly absent.

In this new series, we will feature automotive designers who have changed the world. To start off on the right foot, we decided to start at the top. Maestro was born in Turin on August 26, 1938. Son of a conductor, his life’s work will inspire generations of designers. He has always said that he favors mechanical and practical designs, and some of his designs could be considered as such.

After seeing the designs of Nuccio Bertone, he applied to join their company in 1963. This met with opposition from Bertone’s chief stylist, Giorgetto Giugiaro, whose works we will present in a future article. For two years Gandini and Giugiaro worked under one roof, but they definitely didn’t get along. When Ferrucio Lamborghini came to call, Giugiaro left to start Italdesign in 1967.

What Lamborghini wanted was something new, unencumbered by the brand’s history. Dallara and his team built a rolling chassis based on a mid-mounted transverse V12. Nothing like this had never been done before, but it was naked. Giving Gandini a blank sheet to work with, the 1966 Miura arrived without excuses.

If you want a graceful sedan, he’s the man behind the first BMW 5 Series (1972 thru ’81), the Maserati Quattroporte (both generations) and the Citroën BX hatchback. If you want an Italian body with American power, he designed the final By Tomaso Pantera, as well as the Iso Grifo 90 and 96 concept cars powered by Corvette. The Iso Lele was a 2 + 2 coupe built between 1969 and 1974 and it was powered by a 350 hp Corvette 327 V8.

In the midst of all these plans, Lamborghini asked him to start over. While most other Lambos are named after famous fighting bulls, someone uttered an Italian phrase of astonishment when they first saw them. “Countach” translates to modern English as “WTF”, and this aggressive beast would reign supreme until 1991. Many fans consider the 25th anniversary of the 1988 Countach to be the car’s highlight, but flares, the exaggerated scoops and spoilers were actually designed by a young apprentice named Horacio Pagani.

After the Iso era, Enzo Ferrari asked for a model that would bridge the gap between the Dino and Ferrari brands. The result was the Dino 308 GT4, which would become the 1975 Ferrari 308 GT4. It was their first mid V8 and the first Ferrari not to be styled by Pininfarina.

As a reminder, the 1976 Ferrari Rainbow concept would evolve into the 1979 Fiat X1 / 9. To make this possible, the Fiat 132 was their family sedan from the disco era. But wait, there is more! The World Rally Championship saw many examples of his Lancia Stratos, and he also wrote his competitor in the Renault 5. Meanwhile, the Alfa Romeo Montreal was his conservative 2 + 2 GT car.

In the late 1980s, Lamborghini was running out of money and needed a savior. A great car had the potential to save the brand, but the new owners had more conservative ideas. When Chrysler bought the brand, Gandini’s prototype for the Diablo was deemed too exotic for American executives. As a result, the magnificent design was sterilized by Detroit, but Gandini had the final say. He used his original as the basis for the wild Cizeta-Moroder V16T.

Perhaps it was the beginning of bad blood between the old man and the house of the raging bulls. Nonetheless, he continued to sculpt the resurrection of the Maserati Quattroporte and bring Bugatti into the modern era with the EB110.

Looking back, he not only focused on Lamborghini supercars, he is also responsible for the Bravo, Espada, Jarama, Uracco and Marzal. Snubbing wasn’t the right decision in our book, so let’s be thankful for old Gandini. Stay with us for more spotlight on automotive icons. 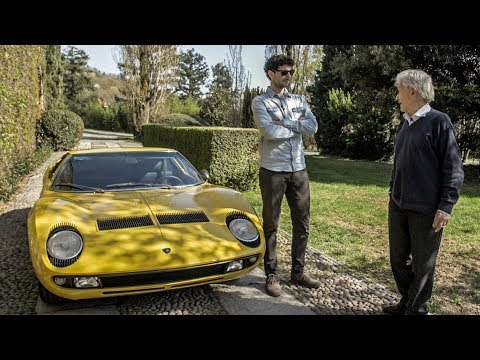 Can we ever make the fashion industry ...